(The Sentinel) – One in three students in Kansas is below grade level in reading and math, but instead of addressing the problem, the bureaucracy tries to deny the truth by claiming that grade level is not measured on state tests. 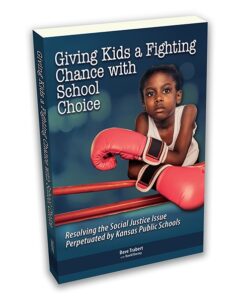 That is just one example of an intractable bureaucracy that works against students’ needs in a new book, “Giving Kids a Fighting Chance with School Choice – Resolving the Social Justice Issue Perpetuated by Kansas Public Schools.” The book tells story after story of education officials consciously deceiving parents and legislators, de-emphasizing academic improvement, and ignoring state laws.

The book is published by the Sentinel’s parent company, Kansas Policy Institute. CEO Dave Trabert and former Kansas public school teacher David Dorsey are the co-authors, and they make it clear that teachers are not to blame for poor student achievement.

“This is not a teacher problem; it is a management problem,” the book reads. “Local school boards and superintendents have made it clear that accountability measures are unwelcome, whether in state law or policy.”

One example cited in the book is a 2019 state audit examining how Kansas schools spend at-risk funding concluded that “most at-risk spending was used for teachers and programs for all students and did not appear to specifically address at-risk students as required by state law.” The state school board president responded with a newspaper column that basically said, ‘shut up, go away, we know what we’re doing.’

The authors also shed light on what they call “educational discrimination” in the book.

“Public school officials enthusiastically declare their devotion to ending racism and discrimination, yet they perpetuate race-based and income-based educational discrimination. Black 8th-graders are nearly three years’ worth of learning behind White students in reading across the nation, and that’s been relatively unchanged over the last 20 years. Here in Kansas, low-income 4th-graders are reading 2.7 years behind other students, and it is getting worse.”

Trabert said the public education system won’t fix this on its own.

“You’d think the education bureaucracy would be laser-focused on ending educational discrimination,” he said. “But you’d be wrong. We wrote this book because Kansas has an education crisis, and the bureaucracy tries to sweep it under the rug.”

The authors make evident in Giving Kids a Fighting Chance with School Choice that the Kansas public school system works against student interests and is designed to sustain the system and the adults who work in it. The book follows the 2019 release of a documentary with the same name by KPI that places a human face on the crisis facing Kansas schools.

“More money is not improving dismal achievement. School districts spent about $17,000 per student last year, but barely half goes to instruction,” Trabert said. “Per-student spending adjusted for inflation jumped 52% between 1992 and 2019, but inflation-adjusted teacher pay declined 9%. The money is there, but the bureaucracy doesn’t use it to improve achievement. There are more high school students below grade level in Kansas than are proficient, and that won’t change if the bureaucracy is left to do as it pleases.”

The authors say Kansas has never had a governor who champions choice, transparency,
and accountability on behalf of students.

“Toward the end of his term in office, Republican Governor Sam Brownback (2011–18) called on the legislature to pass school choice measures and grade schools A–F in his 2017 State of the State address, but that was too little and too late. He knew that achievement was dismally low upon taking office, as he privately acknowledged on several occasions.
But Brownback was unwilling to take on the political fight with the education lobby.

“The state’s current governor, Democrat Laura Kelly, openly sides with the education establishment that effectively endorses race-based and income-based educational discrimination. Like all politicians, she says she is a big supporter of students, but her actions paint a different picture.”

Kelly vetoed the Parents Bill of Rights legislation on curriculum transparency, as well as the Fairness in Women’s Sports Act.  The book also exposes that Kelly’s Commission on Racial Equity turned a blind eye to blatant educational race-based educational discrimination.

The authors contend that educational discrimination is the social justice issue of our times, and they show that, while Kansas has been going backward, states like Florida and Arizona are recording strong gains for minorities and low-income students.  Arizona and Virginia both expanded choice options this year.

“Robust choice programs and a healthy dose of transparency propelled Florida from one of the worst states twenty years ago to now one of the best,” Trabert said. “Arizona also registered outsized gains since expanding choice, and Gov. Doug Ducey just signed a massive school choice expansion.”

Patrick Richardson writes for the The Sentinel.
← Back to Opinion News
Next Article